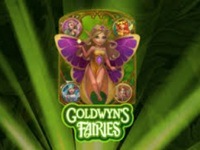 
Goldwyn's Fairies is a 20 payline, 5 reel, 3 row slot machine with Re-spin and Free Spins with a new and exciting Returning Wild feature that will make wilds come back at the end of the Re-spins and Free Spins feature.

There are 3 different Wild symbols in the game: Classic Wild symbol, Re-Spin Wild symbol and Free Spin Wild symbol. When Goldwyn appears in the base game on reel 3, she will enchant the symbol space by leaving a “Returning Wild” and start the Re-Spin mode. Re-Spins continue as long as Goldwyn appears on any reel. During the final spin, all the “Returning Wilds” transform into “Classic Wilds.” Goldwyn can appear on all the reels during the Re-Spin mode. Enjoy the decent RTP rate of 96.28%.

Free Spins
Hitting 3 Scatter Logo Symbols on reels 1, 3 and 5 will trigger 10 Free Spins. During the first 9 spins, Goldwyn can cast her magical spell, “Returning Wilds”. 9 free spins with RETURNING WILD feature and 1 Final Free Spin. On the 10th Free Spin all the positions that Goldwyn has enchanted will summon the Classic Wild to return, and if you are lucky, Goldwyn will grant up to all 15 Wilds on the reels.