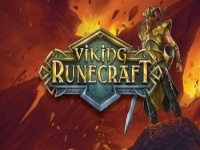 
The fierce Norse warriors are back in a 7×7 grid hiding big treasures in the new Viking Runecraft slot from Play `n Go! You can receive the Gifts of the Gods with wins up to 5000x your bet. Four Viking Gods grace the reels to offer you huge chances at wins.This incredible new game comes to us from the same creators as Gemix and it plays similarly as well. If you know and love that game, you`re in for a treat with this one. Four of the famous Gods from Norse mythology are present in this game and can even offer the Gift of the Gods feature on non-winning spins. Earn different levels in the game to get accompanied by a different God, including Thor, Odin, Freya and Heimdall. Prepare to meet your makers!Levels Clear patterns to reach the level of the Gods. On each level you are blessed with the presence of one of the four Gods!Valhalla Bonus Collect the Rune Stones to have a chance to win the growing bonus! Collected Rune Stones will activate winning spaces on the bonus wheel.  Spin the bonus wheel to reveal your instant prize winnings.Charge of Destruction Feature
Winning on symbols triggers the feature of Destruction on a single full charge. Trigger the destructive Ragnarok Free Round on a double charge!The Gift of the Gods Feature
The Gift of the Gods feature has a chance to trigger on non-winning game rounds. Each of the four Gods offers something different like creating new wilds, 4 new wilds in groups of two, wild clusters of four or a new wild in each row!

Viking Runecraft in the News

▶ Legendary wins from the mighty Vera&John with Viking Runecraft Slots. Welcome, mighty warriors, to the realm of spinning gods and monstrous wins!..