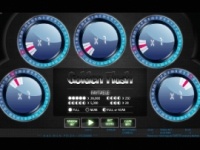 
This is the type of the game that will certainly surprise the bettors with its unusual looks, gameplay and features. The creator behind it is a well-known company World Match, based in Malta. Since 2003 they have been specializing in developing and releasing online games for various platforms including Windows, Android and iOS. They have more than 200 games in their portfolio by now, most of them are classic slot machines, but the Golden Flash is definitely an exception. The first thing one notices after running it is that there are no reels, paylines and other standard pokie characteristics. The screen is mostly filled with five circles framed by numbers. This gives the impression like one is playing some sci-fi version of the roulette. The graphics are very modern and sophisticated, the circles have a nice 3D touch and it looks like they are protruding from the screen. The minimalistic design perfectly follows the futuristic game theme. The toolbar also follows that minimalism, it isn't overcrowded with buttons and dialog-boxes, which is a plus because it makes the game easier to play and understand.

The Golden Flash is a game

Other reviews of similar slot machines:

Rally in the News